Hidden behind the striking facade of King’s Lynn Public Library is a significant, but little-known collection of around 2000 early-modern books, many of which were originally part of two separate libraries founded in King’s Lynn in the early seventeenth century… 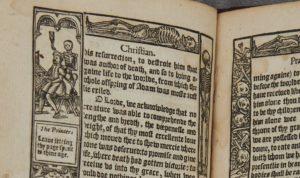 In 1617, according to Benjamin Mackerell (1685-1738), a library was ‘erected in the Vestry of St Nicholas’s church’ (now commonly called St Nicholas’s Chapel) at the expense of the civic authorities, and in 1631 a similar library was established ‘over the North porch’ of St Margaret’s Church (now King’s Lynn Minster). These libraries grew through donations of clergymen, civic officials, and citizens of Lynn, and the books donated reflect the libraries’ ecclesiastical settings: bibles, histories of the church, church fathers, and theologians. These weighty tomes, written in Latin, Greek or Hebrew, were the masterpieces of the European Protestant (and sometimes Catholic) intellectual world. In addition, however, the libraries also acquired many works of science, medicine, secular history, exploration, map-making, and even literature. The riches of Renaissance knowledge are contained within them.

Despite having stayed in Lynn for centuries, these books have had eventful lives. They have survived damp and a journey (in 1961) by handcart through the streets of Lynn to reach their current home within King’s Lynn Public Library, where they have benefited from thoughtful restoration work in the 1970s and the care of Lynn’s librarians ever since.

We are delighted that you can now explore some of the wonderful books from this important collection (including the original seventeenth-century library donors’ book) as part of our interactive digital resource, Discover Historic Books!